THE ALLERGENS IN OUR HOMES 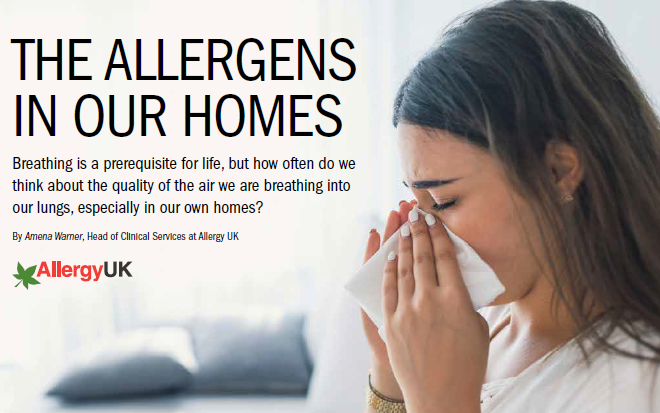 In modern life, most people spend up to 90% of their time indoors, where air pollutants may be up to ten times higher than outside, posing a real risk to our health. In the UK, it is estimated that at least 9,000 deaths are caused by indoor air pollution.

children, the elderly, and people living with respiratory and allergic disease. Inadequate ventilation and high humidity increase the risk of indoor airborne allergens (including house dust mite, mould allergens and animal dander) which can cause allergyrelated problems including asthma.

House dust mite, pet dander and mould spores are common indoor allergens, and whilst these pose minimal risk to most people, they can cause severe allergic symptoms in people  with allergies to these triggers. Indoor allergy symptoms are often confused with a cold or flu and may not be properly treated. Indoor allergens can trigger an allergic condition known as perennial allergic rhinitis, which causes year-round symptoms similar to hay fever (although these symptoms can often worsen in the winter months). Allergens can trigger asthma exacerbations, known as allergic asthma in up to 90% of children and 60% of adults with asthma. Many people are unaware of the link between asthma and allergy, which can lead to delays in management and treatment of the condition. There are two validated and recommended tests for allergic asthma – a blood test or skin prick test. If you suspect that you or your child has allergic asthma, speak to a healthcare professional.

Mould produces spores, which are microscopic particles that cause allergic reactions in those
with mould allergy (particularly when airborne) when they make contact with the skin or are inhaled. Mould spores flourish in damp environments in the home such as the kitchen, bathroom and utility room where steam and humidity levels are high. Top tips to reduce mould allergen

A pet allergy is caused by the protein in a pet’s saliva, urine or dander (shed skin particles).

When a pet licks itself, the allergen is transferred to its hair. Pet hair itself can also act as a carrier of other airborne allergens: pollen, house dust mite and mould, which can cause allergic symptoms in individuals with hay fever, asthma and eczema. 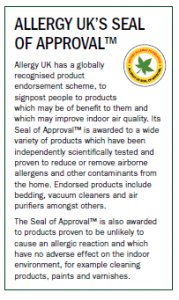 Allergy UK is a leading voice in increasing awareness of poor indoor air quality and its effects on health and allergic conditions. The charity works with other stakeholders to influence change in regulations for improving air quality in both indoor and outdoor environments.

How Clean is Your Home, Really?

THE EMOTIONAL TOLL OF ECZEMA ON THE FAMILY