DIABETESGood oral health is key to prevent and control diabetes

Good oral health is key to prevent and control diabetes

There is a bi-directional relationship between oral health and diabetes: people with periodontal disease have a 20-30% higher risk of developing diabetes, and those who have diabetes are 1.5 times more likely to develop gum disease. The good news is that good oral health in people with diabetes can help reduce blood sugar levels. 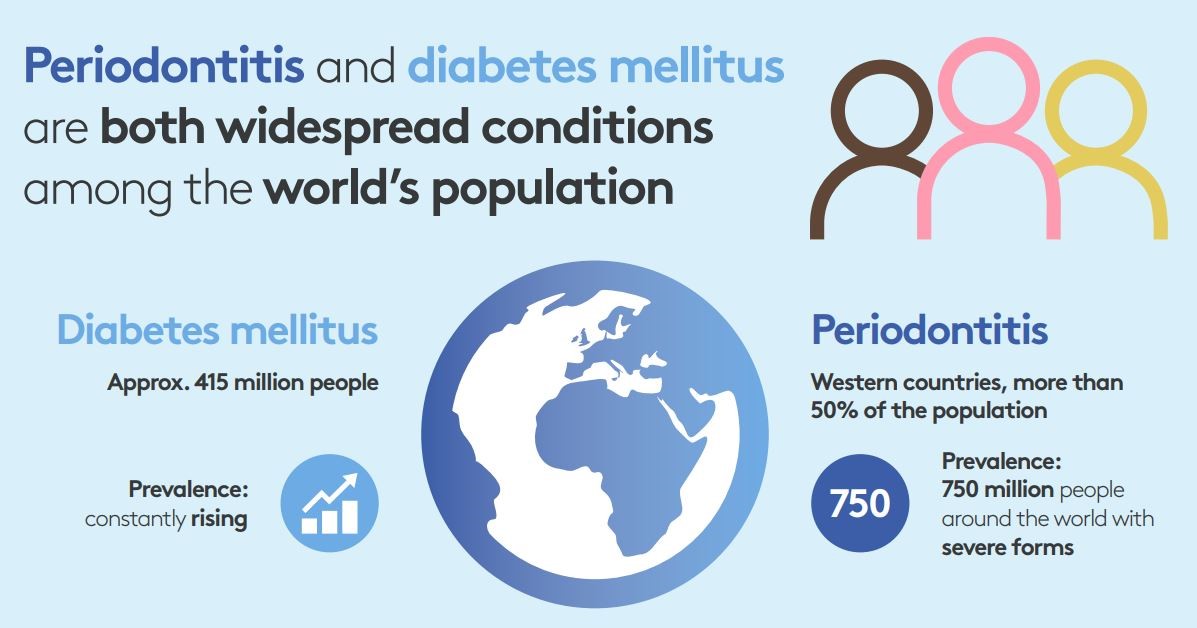 In addition, these two diseases are strongly linked. If you suffer from both conditions at the same time, there is an increased risk of developing complications from diabetes earlier, since gum problems are inflammatory diseases that increase general inflammation in the body. In turn, this increases insulin resistance and leads to poorer blood sugar control. As a result, both disorders worsen and are harder to control.

How can gum disease be prevented?

According to experts, the first signs of gum disease include red or swollen gums, bleeding or blood after brushing, longer-looking teeth, and increased spaces between teeth. Whether or not some of these signs are spotted, basic oral care recommendations are to visit the dentist twice a year, brush twice a day, and pay extra attention to interdental brushing. As SUNSTAR experts explain, interdental hygiene cleans 85% of the mouth, while toothbrushes only clean 60%.

As Dr Marzia Massignani, Sr Manager Scientific Affairs and Corporate Comms at SUNSTAR, states: “Early diagnosis of both diabetes and periodontal disease is essential if we want to improve prevention and treatment. It is therefore vital to raise awareness about this existing relationship and provide useful tools to patients, professionals and people at risk.”

Among the many initiatives SUNSTAR carries out to raise awareness about the connection between oral and systemic dieases, the ‘Perio & Diabetes Campaign’ addresses some powerful facts that help undertand better how these two diseases are intertwined. This project was developed with the European Federation of Periodontology (EFP) and offers a number of educational materials such as video capsules or infographics to spread the message.

The holistic healthcare company is not new to the field of oral health and diabetes. SUNSTAR has been promoting and supporting research for over 30 years now due to the personal story that links diabetes to the Kaneda family (the founders of the company). SUNSTAR’s founder, Kunio Kaneda, passed away due to a complication of diabetes in his fifties. In 1986, the company held the SUNSTAR Portside Symposium, where Hiro Kaneda, Kunio’s son, raised the question of a possible link between periodontal disease and systemic diseases. He suffers from both diseases and felt they were somehow connected. This was the first step towards the recognition of the relationship between oral health and general health.

Ever since, the company, through the Sunstar Foundation, has been contributing to research and raising awareness about the two-way relationship between oral health and general health, particularly about periodontal disease and diabetes.

WHEN ARE GOVERNMENTS GOING TO DO MORE TO SUPPORT PEOPLE WITH DIABETES?