WOMEN’S HEALTHMental HealthCan you meditate your way to a healthy mind?

Can you meditate your way to a healthy mind? 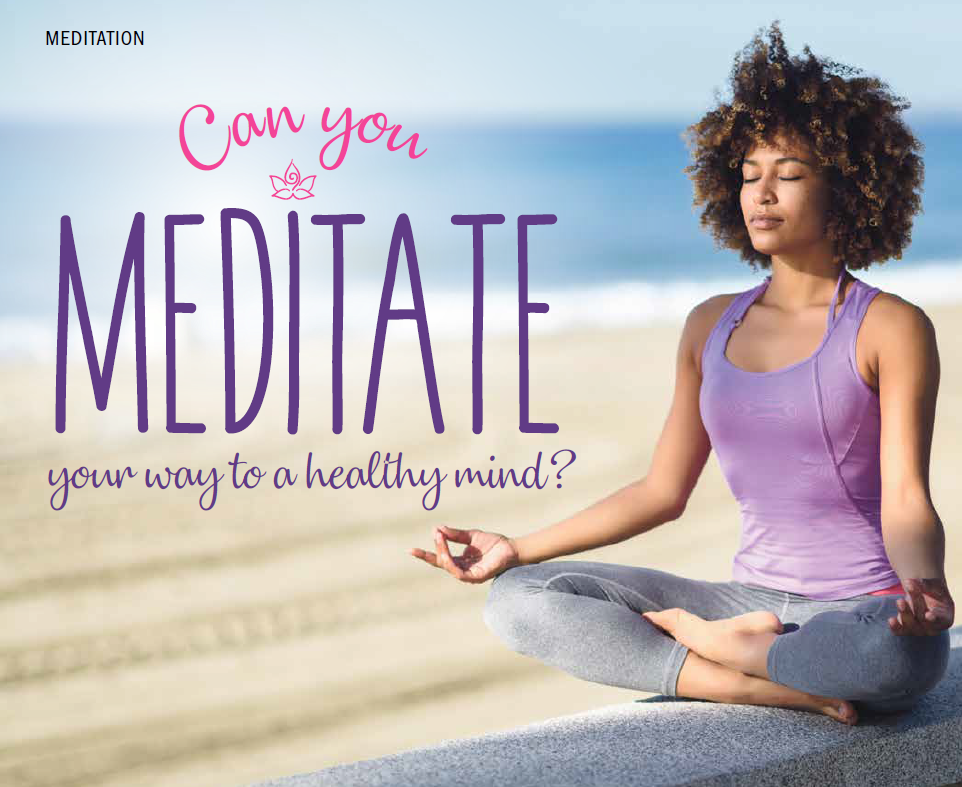 With today’s frantic pace, endless distractions and an ever-growing ‘to do’ list, it’s not surprising that so many of us feel overwhelmed. Dr Supriya McKenna explains how just a few minutes practice a day can lead to a happier, healthier you.

When I used to hear the terms ‘meditation’ and ‘mindfulness’, I assumed th 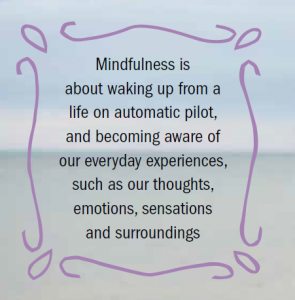 ey were yet more trendy, unscientific buzzwords. Of course, we all know that meditating can provide a peaceful refuge from life’s hustle and bustle. And it stands to reason that being mindful, hyperaware of our surroundings and ourselves in the present, could be a welcome distraction from our stresses. But it turns out that there is a lot more to mindfulness and meditation than meets the eye.

Mindfulness developed from Buddhist practice, is over 2500 years old. But, remarkably, this ancient tradition has finally been validated by neuroscientists, thanks
to recent state-of-the-art brain imaging techniques. 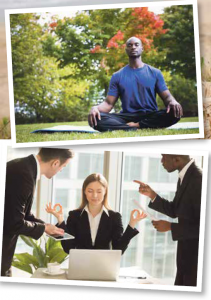 In modern terms, mindfulness can actually be described as a form of cognitive therapy. In fact, Mindfulness Based Cognitive  Therapy (MBCT) is so well recognised that even the National Institute for Health and Care  Excellence (NICE) recommends it for preventing relapse of recurrent depression.

But if mindfulness and meditation can help those with recurrent depression, is it useful for those without? The answer is yes. It appears that, regularly practised, it could actually be a game changer for all, with a wide range of beneficial effects on both mind and body.

But how does mindfulness relate to meditation?

Surely they are two different things? Jackie Coventry is a mindfulness coach from Hampshire, UK (www.skygardenretreat.com). She runs meditation and mindfulness retreats in the UK and in Morocco, and offers individual and group coaching.

. It’s an exercise that builds mental muscle, so that as you go about your daily life you are more able to engage with the present moment.

Just as going to the gym makes you fitter so that you can run for the bus, meditation is the mental exercise that will increase mindfulness in your daily life.”

Mindfulness is about waking up from a life on automatic pilot, and becoming aware of our everyday experiences, such as our thoughts, emotions, sensations and surroundings. “The  aim,” Jackie says, “is to pay attention to the present moment, pleasant or unpleasant, just as it is, without clinging to it, rejecting it or judging it, or yourself, as good or bad.”

Worthwhile, considering that the average person spends an incredible 47% of their time lost in thoughts about the past or the future. Mindfulness increases the time one spends actually living in the now, which can lead to a great sense of peace and wellbeing. And whilst you can simply try to be more mindful in daily life, meditation will make mindfulness so much easier to attain.

“Meditation can literally cause certain parts of your brain to grow, increasing their activity, and other parts to become smaller, ultimately decreasing their activity,” explains Berkshire based psychologist Mark Quirk (www.mindfulnessberkshire.co.uk), who has been impressed with the profound effect meditation and mindfulness has on wellbeing and resilience. “In people that are new to meditation, brain scan studies have shown brain changes after just an eight week meditation course.” 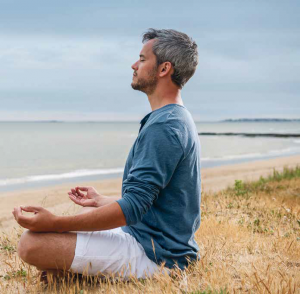 Mark explains how, because meditation gives your brain a good workout, it alters the way your brain cells structurally connect with each other. “In our daily lives, the more we think and re-think about certain experiences, the stronger the links become between the particular nerve cells involved,” he says. “These so  called ‘neural pathways’ then become more easily activated and so the resulting unhelpful patterns of thought become more and more ingrained. They become our automatic ‘go to’ defaults.”

Those obsessive thoughts that appear when you want a distraction from something unpleasant? The way in which you automatically negatively respond when your boss is short with you? The ruminations about your relationship breakdown? The negative self-talk when you catch sight of yourself in the mirror? The downward spirals? Meditation can help starve these reflex thoughts patterns, reducing our reactivity to situations.

Mark adds, “Meditation has been shown to increase the density of gray matter in various areas of the brain. Areas responsible for attention, learning, memory, self awareness, emotional regulation, empathy and compassion. In meditation we’re actually practicing these skills, and so these brain functions improve.”

“In today’s world, we are constantly bombarded with small-scale stressful events that aren’t life threatening. Yet, our brains’ safety systems aren’t good at subtlety.

So these events are misinterpreted as dangers to our survival, as if a tiger were about to attack. Meditation helps turn down the volume on such inappropriate responses.”

It does this, Mark explains, by causing actual shrinkage of the brain areas involved with our flight or fight responses. And this shrinkage has been shown to correlate with less feelings of stress. 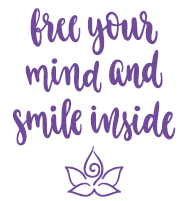 Another area of the brain that is relatively overactive in people who don’t meditate is the PCC; the part of our brain which causes us to get caught up in our thoughts and stresses. It’s activated when we think about ourselves, the past, the future and when our minds wander. It’s also involved in cravings, guilt and judgmental thoughts.

Jackie Coventry simplifies, “It’s the very bit of the brain that is overactive when we are not present in the moment.” However, meditators have decreased activity in this brain region. “And this,” Jackie says, “gives them a sense of perspective, peace and increased mindfulness in their everyday lives.”

Just eight weeks of meditation has also been demonstrated to boost the immunesystem, by increasing the amount of antibodies the body produces to fight bugs.

And, incredibly, there is evidence that meditation slows the speed at which our cells age. Our chromosomes, present within our cells, have protective caps on their ends called telomeres. These shorten as we age and, when too short, the cell either dies or malfunctions. Meditation increases amounts of an enzyme which lengthens the end caps, literally slowing down ageing.

Even age-related thinning of the brain is slowed by meditation; MRI scans show that 50 year old meditators have thicker brain areas than their non-meditating counterparts, with brain densities similar to those of 25 year olds.

So what does one actually do when meditating? Mark Quirk explains, “A typical meditation (and there are many different types, lasting 3 to 40 minutes) consists of focussing your attention on each breath as it flows in and out of your body. As you do this, thoughts will naturally arise in your mind. The act of focussing on the breath allows you, with practice, to observe your thoughts with perspective, rather than being swept into and away by them. 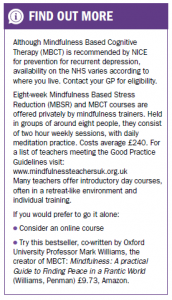 breath possibly train the mind, let alone have such profound benefits on wellbeing and health? Well, although meditation may sound simple, it is anything but easy.

“The major challenge is to allow thoughts to come and go, without getting caught up in them,” says Jackie Coventry, “and that takes practice.” The mental weightlifting is the act of repeatedly escorting one’s mind back to a focus of attention (usually the breath) when distracted by thoughts, and this is what is key to training the mind. What’s more, having a non-judgmental, self-compassionate attitude whilst doing this is an essential part of the effectiveness of the training. Jackie maintains, “If you try too hard and chastise yourself at losing your focus, the bits of the brain you are trying to deactivate actually become activated instead.”

Taking urinary leakage in our stride:

Putting the world to bed. A quiet revolution.